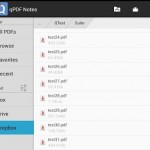 qPDF’s redesigned file browser is a powerful tool to find and organize PDF documents on the go. Files can be opened directly from Box, Dropbox, Google Drive, edited on the device and then saved back to the cloud, in a single tap. It is now as easy to work with cloud files as it is with local files and users have the freedom to choose their preferred cloud storage. The redesign also adds the ability to delete, rename, or mark files as favorites, and new views were created to list recently opened documents, user favorites, and all PDF documents on the device.  The recent files list can now be cleared. 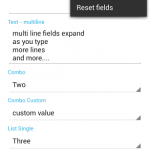 The Fill Form view has been totally redesigned to make filling PDF forms on the go as user-friendly as possible. Form fields are now organized by page, making it easy to jump to any page and fill in form data. More JavaScript support has been added, as well as the ability to reset fields to their default values. 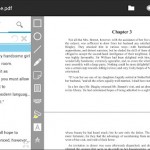 The bookmarks pane, allowing navigation within PDF documents using bookmarks, outlines, comments, and search results, was made expandable so the lists can be viewed in full screen.  This intuitive tablet interface was also copied over to phones so that all users would now have the benefit of the search pane as well as easier access to bookmarks, outline, and comments tabs.

As usual, the newly implemented features have a consistent, streamlined look that closely follows the Holo design principles. qPDF Notes and qPDF Viewer are tablet-optimized so they look great on all size devices, from small phones to large tablets.

Finally, all labels have been internationalized in German, so the app is now available in  5 languages: English, French, German, Italian and Spanish.

The PDF technology found in Qoppa’s Android apps is available in an Android PDF SDK for Android developers to integrate into their own apps.

Qoppa Software specializes in the development of high-end libraries and applications to work with PDF documents. Qoppa Software offers a suite of highly portable products that cover every aspect of PDF processes and integrate seamlessly into document work flows, including end-user, server and PDF library products. Qoppa’s products are carefully designed and developed on Qoppa’s own robust PDF technology to provide the highest level of performance and reliability.